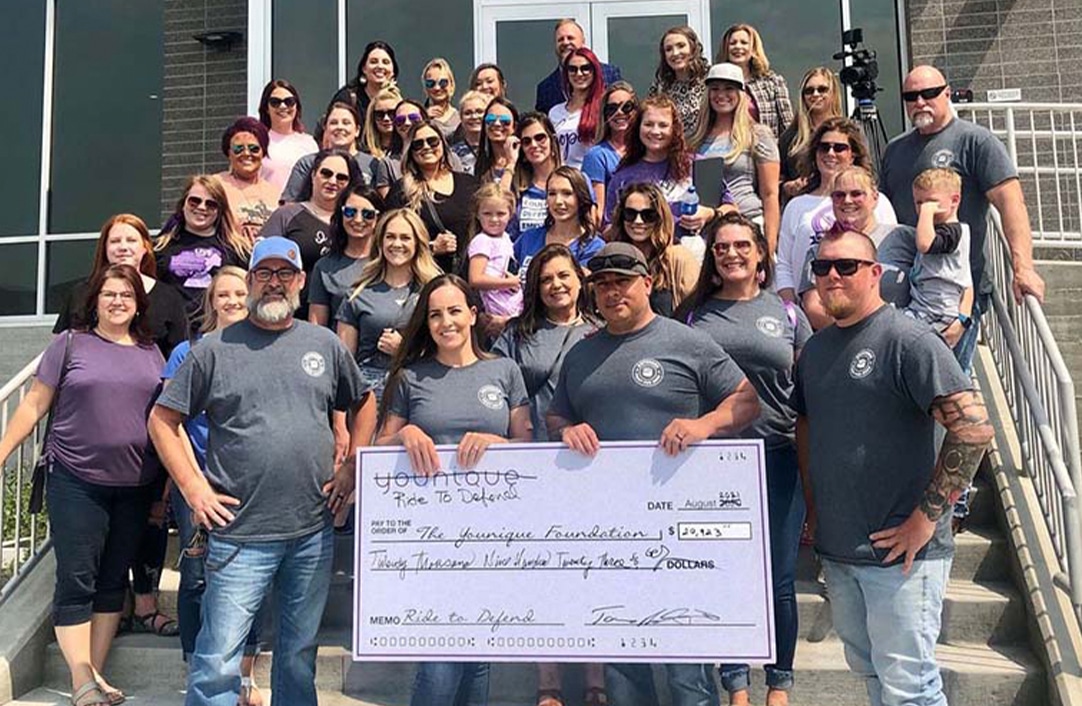 For the second year, Ride to Defend, a cross-country motorcycle ride to raise donations for The Younique Foundation, traveled a combined total of 9,808 miles and arrived at the Foundation headquarters in Lehi, Utah, last month. The goal? To raise $20,000 for survivors of child sexual abuse.

Ride to Defend not only met its goal, it also raised enough money to send eight survivors to The Haven Retreat. The retreat, with locations in Utah and Georgia, is a four-day educational experience for female survivors of child sexual abuse. Its purpose is to educate survivors about the traumatic impacts of abuse, as well as introduce healing tools they can continue to use when they return home. The retreat is offered at no charge to survivors thanks to private donations like the ones received from Ride to Defend.

The past two years, this group of motorcycles rode cross-country to raise awareness for the fight against child sexual abuse and its effects. “When our supporters combine their personal passions with our cause, incredible things happen” said Shelaine Foundation President Maxfield. “They sacrificed time away from their families and their jobs to help make a difference in the lives of survivors.”

The three motorcyclists who made the ride include Tony Silguero from Houston, Texas, Jeremy Robinson who rode from Eros, Louisiana, and Kenneth Fazenbaker from Hooversville, Pennsylvania. Each took a week of vacation from their businesses and rode to raise money for survivors of child sexual abuse.

Along the way, they attended an event at a Harley-Davidson dealership in Nebraska where they sold Defend Innocence T-shirts, the prevention brand of The Younique Foundation, and shared its mission while collecting donations.

It takes Silguero four days to make the journey from Houston. “We do this ride to raise awareness and to share information about The Younique Foundation and how others can help,” he said. “Ride to Defend is about helping change a life, or maybe even saving the life of a survivor.”

For Fazenbaker, this was his first year taking part in Ride to Defend. He spent five days on the road during his ride to Utah. “It makes me feel good knowing that I may have helped a woman deal with something that has plagued her life and maybe be able to deal with it better. I want to make it something I do every year.”

It took Robinson a total of eight days to make the round-trip from Louisiana to Utah. He supports Ride to Defend in honor of his wife who is a survivor of child sexual abuse.

The Younique Foundation also acknowledges the many others who contributed to this fundraiser and are supporting the mission of extending healing to survivors of child sexual abuse.”

Ride to Defend is already planning its third ride again in August 2022.